If you’re a travel junkie, the world is your smorgasbord and you’re free to take your pick! Below are the top 5 safe places to travel

There is so much beauty, breathtaking travel destinations, mesmerizing beaches, and spellbinding architectural marvels the world has to offer. Unfortunately, we cannot ignore the fact that not all places rank the same on the ‘safety’ factor.

Finding the Top 5 Safest Places to travel might seem like a difficult task. Fear not, I have done the hard work for you in this list of my favorite (and safe) destinations.

No matter if you’re a solo traveler, someone backpacking through historic cities, or simply on a family vacation; you’d want to make sure what you’re signing up for before drawing up the itinerary or investing in a travel plan.

This post is an attempt at helping travelers who are wondering about the safest places in the world to vacation to.

A place synonymous with peace and quiet, Iceland sure is the safest best for people who’re big on travelling safe.

Don’t be intimidated by the nickname ‘The land of Fire & Ice’ given to it. No one is going to throw ice or fireballs at you.

You can expect to be treated warmly here. We bet most of the lists offline and online will have Iceland on the top as one of the safest travel destinations. On average, 60,000 Americans visit Iceland every year. Amazingly, no Americans have died of unnatural causes if the stats from 2008 are to be believed.

Although the place has been experiencing a bit of instability since 2009, it’s still one of the safest places to travel in the overall sense.

An oasis in the desert – Salalah is a traveler’s paradise. It’s the perfect amalgamation of lush greenery, pleasant tropical weather and serenity at its best. It’s called the perfume capital of Arabia. That alone should be reason enough to visit this Middle Eastern heaven.

While here, don’t miss Khor Rohir where you can be a part of an exquisite experience which is – ‘extracting the scented resin’. The fact that Frankincense has been listed as a UNESCO World Heritage site makes it all the more worth checking out.

It continues to lure tourists from all around the Middle East, but people from around the world are also more than welcome.
Like many countries, there’s a slight degree of political tension. Despite that, the place is quite friendly with friendly people. However, be wary of large scale gatherings and demonstrations as a precautionary measure.

Like most Scandinavian countries, Sweden is peaceful and one of the safest places to travel. The only thing you will find barbaric about this country is its cold harsh weather and the equally unique and challenging food. Don’t be surprised if you have to survive on grilled cheeses and a raw meat diet throughout your stay. Plan your trip accordingly! (The food in Sweden is delicious but depending on your personal taste, you may want to stay away from regional delicacies).

Just so you know, Sweden (and Iceland for that matter) are not exactly low budget-destinations. If you’re carrying a lot of cash, grab a travel organizer and thank me later. Other than being famous for its polite folk, Japan also happens to score low in terms of crime rate.

There are strict laws pertaining to the possession of guns, swords, and knives. Instances of robberies are near to non-existent compared to most western first world countries.
For a country that houses more than 127 million people, it only reports 500 murders on an average per year.

There is strong devotion to family values and there’s a social conscience in the Japanese culture which makes it stand out from the rest of the world.

Japan is quite a progressive place. It’s a blend of modernity and ancient culture. Japan’s combination of strong cultural values and western culture influences strike a unique contrast.

A place some might not consider due to it’s remoteness, New Zealand is an incredibly safe destination.

In 2010, New Zealand recorded only 46 murders. Even for a small population of 4 million, that’s very low. Year 2012 was crowned the safest year in the history of New Zealand in the last two decades. Unlike some of the more hostile countries who have a cold and nonchalant attitude towards foreigners, New Zealanders are some of the warmest people in the world. They’re also not afraid to extend that hospitality to tourists.

The government is very particular about human rights. Lack of political instability and low internal conflicts definitely make it a city rejoice in for travelers.

So you can rest easy and travel to New Zealand without any great fear of violence or exploitation.

Feeling the hankering to pack your bags and set off for to one of these beautiful destinations yet? I know I am.

Plan your itinerary and do share you experience with us! 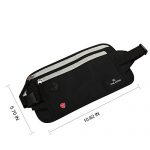 Related Articles
We will be happy to see your thoughts